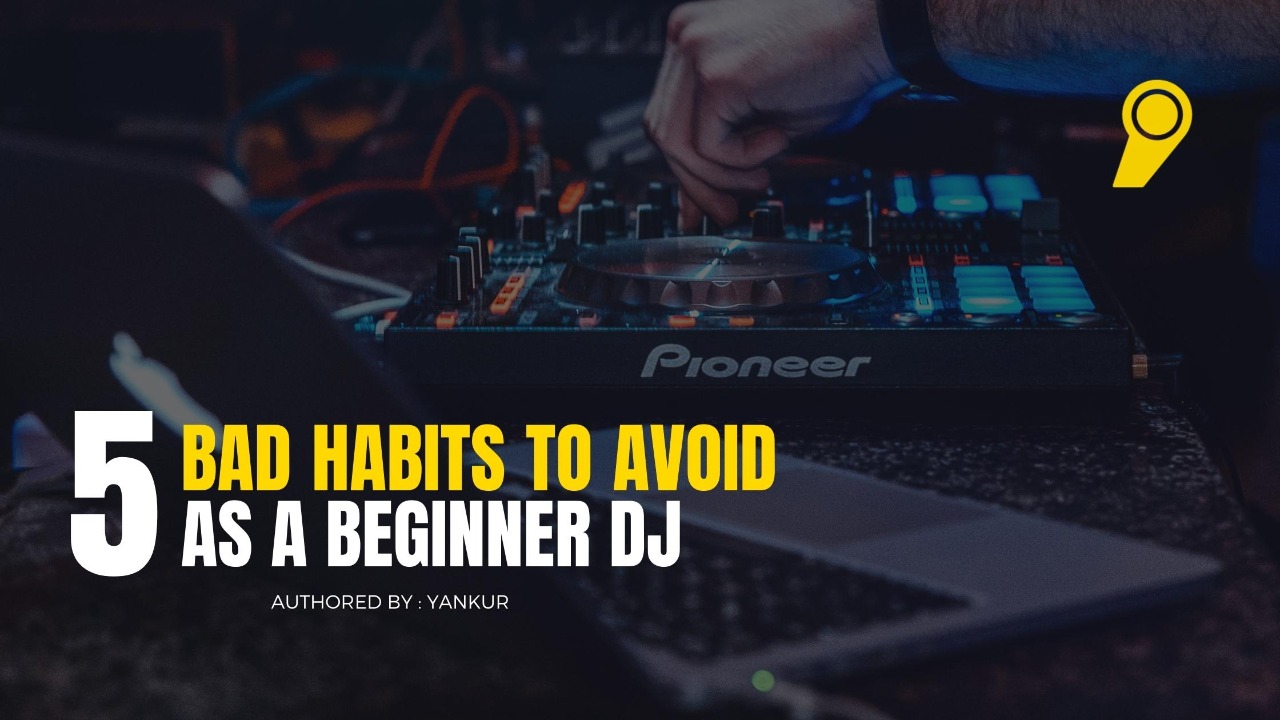 When you first get behind the decks, there’s a lot of emotions that come into play. Between the excitement of mixing tunes and the nervousness of performing for the first time, we can often get carried away or lose focus. It’s important to remember though, that the practices we follow this early go on to become habits we carry on through our careers.

That’s why in this blog, we’re going to talk about 5 bad habits to watch out for as a beginner DJ and how to avoid them.

One of the most common bad habits among DJs is overuse of Effects. While using effects is a great way to add a splash of excitement into a mix, new DJs will often blast FX nonstop into their mixes which leads to unwanted noise. Also over using the same effect over and over again in the same set can be just as bad. This can become really noticeable if it is a non-subtle effect (like roll/beatmasher or filter sweeps) used in the exact same style throughout the set.

DJ with the levels at red

Even if you are playing the best set of your life, if your volume is not set correctly it will not sound good to your audience. On our DJM mixers the red frequency signal implies that your dedicated channel or your master volume is at peak level which will lead to distortion on speakers. Set the master output gain so the average is 0dB. Just like the channel output meters, this is usually the top green LED. The transients on each individual channel shall hit between +3 and +6dB which is usually the yellow LEDs on your channel meter. Make sure your channel meters do not hit the red LEDs because that means you are distorting, which sounds bad. And it is worth it to learn how to set the gain structure properly to ensure the audience hears your set the way you intended.

YouTube is a good source for exploring new and old music but definitely not for downloading or perhaps ripping the music. As you rip a track from youtube the quality degrades. It’s always good to buy music from trusted professionals DJ Record pools as it maintains standard quality of volume.

Play bangers early on in your set

Most of the opening DJs intend to make this mistake. The art of warming up the crowd is a very responsible job and the new DJs often lost their track in an attempt to get noticed by the crowd by playing the bangers or all the trending tracks at first on the opening set. Even if you’re playing top 40 tracks, consider saving some of the best hits and remixes that you’ve uncovered for the final 20 minutes of your set – and leave the crowd wanting more when you’ve finished! Always be smart and save the right track and play at the right moment.

As a DJ, it’s almost guaranteed that you will regularly be in frequent environments where drinking alcohol is a common and popular practice. Alcohol and drugs can have a dramatic effect on a DJ’s. Also not only on your performance this can impact on your health and personal life. Under the influence of any alcohol or drugs your performance can go wrong. You might lose the ability to read the crowd and tell what they want. At the most basic level, DJs are given responsibility to make smart musical decisions for an event based on the crowd & venue. It becomes very hard to make good judgment calls when your decision-making centers and motor skills are seriously impaired. As we know the various parts of the brain are affected with more alcohol. The first drink largely limits inhibition (generally not a bad thing) but further drinks result in mostly negative effects. So, if you must drink, then just be smart and keep it in moderation.

Keep in mind that these are just some of the bad habits to avoid when you start your career. There are a number of others to keep an eye out for while you’re growing as a DJ. Avoiding bad habits and actively cultivating good ones, will pay off in the long run. So make sure you’re putting in the time and effort to build on them.

As part of our DJ courses and Music Production courses at TheMusic’scool, we not only focus on developing your skills on the console, but also help you identify and avoid bad habits while building a strong foundation with good practices.

If you’re keen to start developing your skills as a DJ or producer, you might want to check out some of our courses:

How you can get a professional DJ website up and running by yourself.

We round up all the best features from the recently launched Pioneer CDJ-3000 and DJ-V10-LF. Learn more about what the new equipment has to offer.

Welcome to the first episode of TMS Trivia – a weekly short, curated by The Music Scool, in an effort to build interest and skill in the basics of electronic